Rules For Dating My Daughter - Kerri and Barb Pomarolli


I was raised with a very Christian, very southern mother. She’s a Presbyterian from Alabama—God’s country. She’s way more Christian than any of us. She quit her church choir when they added a tambourine. You can only imagine what it was like being raised by perfection. She never drank, she never smoked, she never swore and she’s still a virgin!

Then you throw in my Italian Catholic father who raised me with good Italian values…guilt and intimidation. I guess that stuff works because I didn’t do a lot of bad things because I was afraid—not of the wrath of God but of my Italian father. Did this affect my dating life? What dating life? The fact that some man survived the matrix and got me to the altar is a miracle. Now that I’m the parent of two daughters, it occurs to me that some of that nonsense my mother was spouting might actually make some sense. Feel free to enjoy my teenage rules. I’ll be out in my front yard building a moat and a tower to “protect” my daughters. After all, Mother Knows Best!

A Southern mother raising a Yankee daughter in Michigan was difficult because there were certain rules that I expected boys to follow and Kerri was very quick to point out that things were different than when I was her age.  Since I didn’t buy that theory, I insisted that she and any boys she dated follow my rules.  My main objective was that she be treated with respect and if she set high standards for herself, then boys would respect her.  There were certain basic rules that her dad and I set and then some old Southern proverbs which I thought were very appropriate.

1. Don’t call boys or they’ll think you’re desperate.  In my day (I love to say that), a girl never called a boy, mainly because in my early teens we didn’t have phones.  But when we did get phones, it was strictly forbidden to call a boy because Emily Post said it was bad manners and we adhered to Southern etiquette.

2. A girl can never go out with a boy before he has met her parents.  We definitely wanted to see and talk to anyone that Kerri was thinking of dating.  Since her dad was a psychologist, the poor guy usually had to answer 50 questions before he could get Kerri out of the house.  If he asked her out again after that test, then we knew he really liked her and hopefully respected her parents.  If he didn’t ask her out again, then we thought she was better off without him.  Kerri’s father just reassured her if he wasn’t interested in courting his perfect daughter he had severe psychological “issues.”

3. Kerri’s dates always had to come to the door, come inside, and speak to either one or both parents even if she had been dating him 2 years.  She did not go out the door when a guy sat in the car and honked the horn.  If he didn’t have enough courtesy to get out of the car and walk up to the front door, then she wasn’t going anywhere with him.

4. Kerri’s dates always had to walk her up to the door to say goodnight.  If she invited them in, they had to speak to whichever parent was waiting up for her. In most cases it was her father cleaning his knife collection.

5. Boys were never allowed in her bedroom, no matter what the circumstances.  There was nothing in her room that couldn’t be brought downstairs for a boy to see if it was of critical importance.

6. There was an old Southern saying that you could tell a lot about a boy by the way he treated his mother.  If he showed her respect and courtesy, then he would show his girlfriend that same respect.  If he was rude or obnoxious to his mother, then he would probably act that way with a girl.  That saying usually proved to be true.

7. It was a Southern custom that guys always opened doors for girls and I taught that courtesy to my son, but I’m not sure all of Kerri’s boyfriends thought it was a necessary part of good manners.  I told her just to stand next to the door of the car or restaurant or where ever they were going and just wait until he got the message.

8. Another custom in my day thing was that the guys paid for dates, but somewhere along the way, that custom went by the wayside.  I guess when the price of movie tickets and hamburgers got so outrageous; there wouldn’t have been as many dates if the guys had to always pay for everything.  Then there was the Women’s Lib movement that made girls feel they should be equal so they should share equally in the cost of dates.  In my opinion that was a bad move for females altogether but that’s just my opinion.

9. You may have to kiss a lot of frogs before you find your prince.  I’m sure in Kerri’s case that was true, but thankfully she eventually found her prince after a lot of toads.

10. The kind of boys who are overly nice, nauseatingly so, to your parents are the one you have to watch out for.  They’re usually after more than a kiss.

11. “Why buy the cow when you’re getting milk for free?” was an old Southern saying which I’m sure was very true then and still is.  That’s why setting high standards are very important.

12. Lastly, since Kerri has an Italian father, she was always reminded that any time a guy was getting too fresh; to just tell him that her dad was connected to the mafia and those guys got their kicks from breaking body parts.  That always worked.

Kerri’s Reflections
In looking back at these rules, I do see the wisdom in them. I did my best to follow most of them—and for the ones I didn’t, I just tried not to get caught. I think having the strictest parents on the block made me feel safe in a lot of ways and saved me from more uncomfortable situations than I care to admit. One time I guy who took me to a homecoming dance asked me to go “hot tubbing” with him and his friends. I just plainly walked into my living room and asked my father: “Dad, can I go hot tubbing with my date tonight at 11:30pm at his uncle’s house?” My dad slowly walked over to me and my date who was all of about 5 foot 4 and said, “Thank you for returning my daughter and here is the door.” I knew I could always count on Dad. It’s funny how we look at parenting from such a different perspective once we become parents. The only thing I’d change about these rules for my daughters today is that neither of them is allowed to even look at a boy until she is at least 30!

Hey guys check out my latest interview with Drew Marshall.

Click here!
Posted by Kerri at 4:54 PM No comments:

I have always hated Pinterest! Pinterest moms with their matching tupperware and lids scare me. This is in honor of them.

Hey guys! I will be heading to Omaha, Nebraska on March 14 for a ladies event. If you are in the area I would love for you to come! It is going to be a fun night! 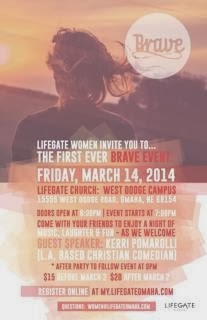 Newsletter: A Reminder of Miracles--A personal story from Kerri Pomarolli

Hey guys, we have recently added some new dates for the spring. Check them out and we hope to see you at a show soon! Thanks for your continued support!