Hey guys! I have been busy lately doing interviews promoting my new devotional, "Mom's Night Out and Other Things I Miss." Be sure to check them out below.

I am also excited to announce that my book trailer has been released. This will go on the back of "Mom's Night Out" DVD as a bonus feature. If you have not seen it yet, watch it here - http://youtu.be/NXTVkp66p2c.

Interview with Lyn Parker of Super Mom the Illusion:

Tales from a Hollywood God Girl - What is Joy?

As I was watching Oprah being interviewed in one of her more private moments, she was asked what she wanted out of life. She said,“I want more joy!”

I find it funny hearing that because from the outside wouldn’t you think someone like Oprah Winfrey could have “joy” picked, purified and delivered to her door. And of course it would be organic! She’s so wealthy there is literally nothing she can’t buy. But she doesn’t have enough joy and neither do most of the Hollywood celebrities we spend our lives obsessing over.

We’re all guilty to some degree of daydreaming of the lifestyles of the rich and famous.  I mean who wouldn’t want exotic vacations, lavish homes, and staff that cater to their every need? I always seem to think these people have some secret to a more contented life. They always look so happy and thin, don’t forget thin! And Angelina Jolie has one nanny for each child! What mom wouldn’t want that?

But at the end of the day these “celebs” lay their heads on their pillow and go to sleep in their beds just like we do. Their sheets may just have a higher thread count. Here’s the revelation, “They are no happier than we are!” I’ll take it a step further and say most of them are so caught up in “the Hollywood machine” their anxiety is so high they’re actually unhappy. Why am I bursting your bubble about your favorite stars? Because I think we all need to make some changes in the way we look at pop culture. Maybe we have a part to play?

If each one of us took a step back and stopped empowering the media I think we’d be better off. Do we really need to encourage  programs called “Britney Spears-What went wrong?” I know it’s tempting.  I watch those shows like a train wreck…sometimes I just can’t look away. But I’m trying to make myself a promise not to spend my time listening to speculations about celebs trying to figure out “who’s the hottest” in 2014.  I really don’t get more joy by living vicariously through perfect good looking strangers. I just think I’ve been brainwashed by too much entertainment news that I need to know what’s going on Justin Timberlake’s love life.

I think it all boils down to the little poem I learned in 1st grade: Joy = Jesus, then Others, Then Myself. (I don’t think it means reading all the tabloids in the supermarket line or at the hair salon).

We as Christians can be known sometimes to be the first to judge a sinner for their misconduct and trash talk celebrities like we know them and their hearts (as if we’re so perfect). Luke 15:7 states, “I tell you that in the same way there will be more rejoicing in heaven over one sinner who repents than over ninety-nine righteous persons who do not need to repent.” So instead of joining the ranks of the celebrity worshipers or the people trying to play God, lets remember these “stars” are people who need some serious Jesus and our prayers can make a difference! When I go onto a set or have a big meeting in Hollywood, I try to pray for the person I’m meeting with and ask God how I can be a witness of God’s love and not God’s condemnation.  That film exec might have a child that needs healing or a personal situation that God will give me just the right words for. Maybe I’m the only Christian they’ll ever open up to? I know we’re called to be in this world, but we don’t have to do things “the world’s way.” I know it’s hard!

I’ve been convicted lately because I’ve been teaching my 6 year old daughter the word “inappropriate” when it comes to things she’s looking at. I’m a drill sergeant when it comes to what I allow her to see. We were doing pedicures together the other day and I was reading People magazine. Lucy kept grabbing every page saying, “MOMMY this is inappropriate! Mommy this lady is inappropriate, look at her dress.” She finally grabbed the magazine and threw it down. She said, “Mommy I think you better put that whole magazine away! They need some Jesus!” Well, after I got over my embarrassment of being called out by a 6 year old, the thought that I’m raising up the next generation of Godly women brought me something great -- JOY!  I just have to go throw away all my pop culture magazines before Lucy finds them. No wonder my mom read "Guideposts!"
Posted by Kerri at 11:06 AM 1 comment:

Join the No More Frumpy Mommy 'Moms' Night Out' Challenge

Join the No More Frumpy Mommy ‘Moms’ Night Out’ Challenge

Motherhood can sometimes seem like survival of the fittest. Every day brings its own troubles, and by the end of the day, you’re spent. Between school, soccer practice, cleaning, laundry, cooking dinner, putting away dishes, and keeping your kids from going at each others’ throats, the last thing on your mind is getting away for an evening. If that’s you, you’re invited to take part in my No More Frumpy Mommy challenge.

Here’s what you’ll need to do:

To All the Moms

Hey guys check out my latest article  "To All the Moms' featured on believe.com. Read it here - http://www.believe.com/articles/To-All-the-Moms/ 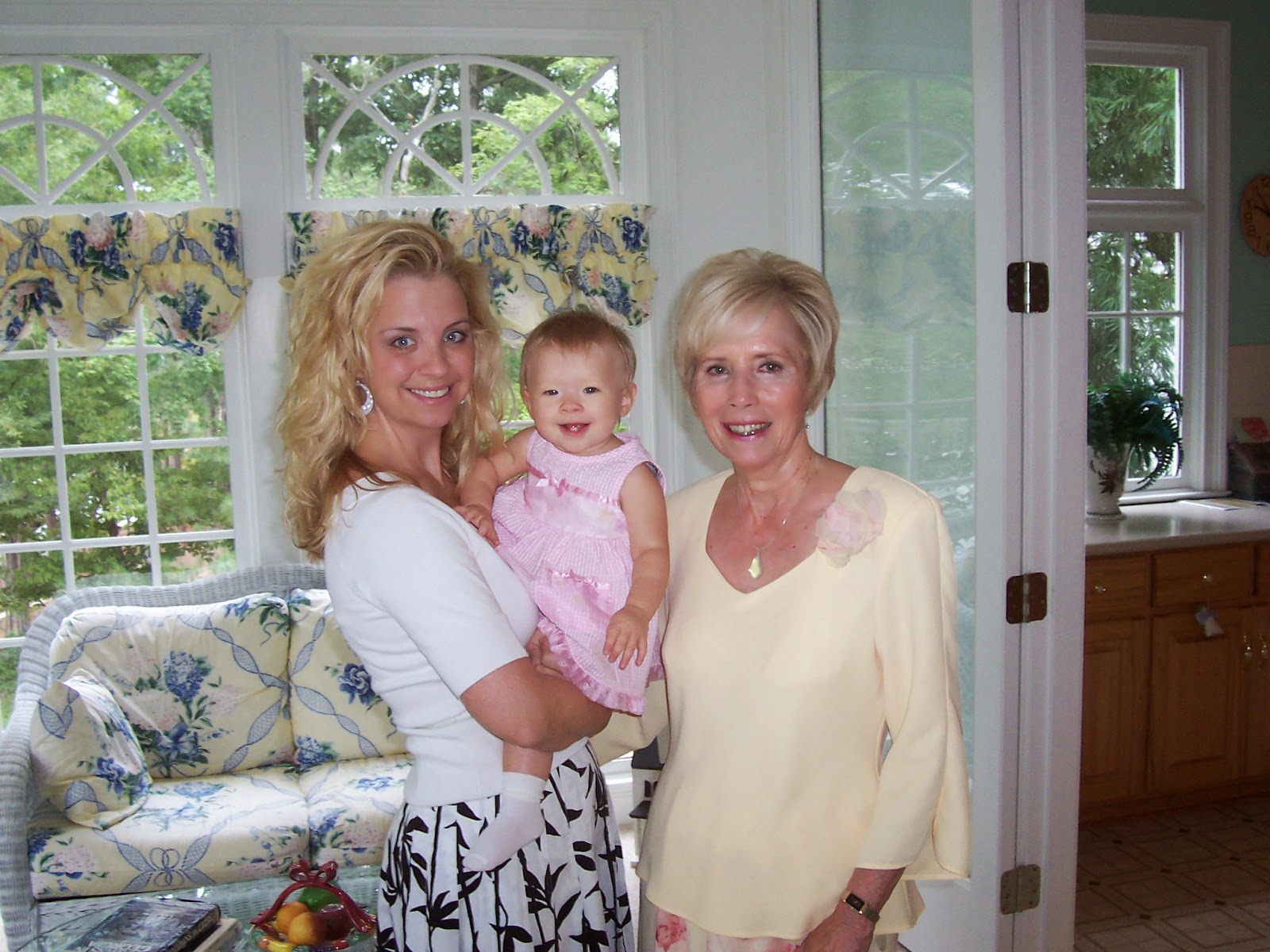 My mom is from the south and had one dream — grandkids. I was in ministry as a single woman for many years. I called it, “Bitter Party of 1!” My mother was so obsessed with me getting married they'd have prayer circles at her church to cast out the demons that were keeping me single! I told her the demons were called "good taste and standards!"
Anyway, she was very pro-active when it came to finding me a man, especially as the years went on and I reached the ripe old age of 26. I was living in California and one morning I woke in terrible pain. I thought for sure I had food poisoning from the sushi I had bought on sale at the grocery store. I ended up in the ER, and having emergency appendix surgery. I was on pain meds and really dazed and confused. I remember while I was lying on the hospital gurney hearing a voice of comfort. It was my mother Barb. She was leaning over the IV in my arm saying, ”Kerri, sweetie, here put some lipstick on. I think the Dr. is single! I'll be right back. I noticed he did not have on a ring! I'm gonna go get him!” Here I was laying there in my Precious Moments night gown my grandmother had given me for my birthday, looking mildly like a homeless person, and she was trying to apply Maybelline Cotton Candy #4 Lipstick on my face and freshen me up to meet my future Dr husband. This woman had no boundaries. I could barely understand her, but I pretended to still be sleeping. About 40 seconds later my mom runs back in the room and she has a male nurse with her. He looked like he'd been taken captive by a pirate (my mother). She was holding him by the arm and brought him right over to me. "Kerri, honey this is LJ. We just met in the hallway. He works here and he's very nice." He looked to be in pain, more pain than me because I was on drugs. She looked at him and his name tag and said plainly, “So what does LJ stand for? Could it be LORD JESUS?" This is my daughter Kerri. She's a comedian. She's been on The Tonight Show. Do you like Comedy LJ? Well, say something Kerri!" And yes ladies and gentlemen that actually happened. No, LJ did not call me and the “single  Dr.”  somehow disappeared also. You wonder why I became a professional comedian? It's for moments like these because with a mother like mine, it's cheaper than therapy!
Mom finally got her grandkids after I told her I was getting married to a Korean Irish Comedian with no health insurance. We certainly enjoyed her calls to us on our honeymoon saying to my husband “So when am I gonna get some grandkids?" Ron replied, “Well Barbara as soon as you stop callin!"
Happy Mother s Day to a mother who makes life interesting! I love you Barb!
Posted by Kerri at 12:39 PM 1 comment: