Guest Blog
Behind the Scenes of Comedy by Kristin Weber

Hi! My name is Kristin Weber. You might know me as Kerri's opener if you've followed her comedy. She is mentoring me in the ways of laughter, and I have had the privilege (the crazy, insane privilege) of touring with Kerri, Ron, and their two kids Lucy and Ruby, this past week in their Eat Pray Laugh tour throughout California. Kerri asked me to post my Day 4 Account on her blog. Here it is! Enjoy =)

(By the way, if you wish to read the accounts from the first three days visit my personal blog at http://kristinweber.blogspot.com)

Day 4 of our tour was also spent in Napa. We had two shows that day, so there was no sight seeing. I only performed at the evening show, but Kerri and Ron did some time in the morning at a church service.

Lucy, Kerri's 3-year-old, used to come on stage during her act. Unfortunately Lucy was banned from the stage after saying "stupid" into the microphone during a show.

Kerri decided to give Lucy another chance and had been coaching her on a short comedy bit. The bit was supposed to go like this:

Kerri: "Lucy, what do you say to Satan when he tempts you to do bad things."
Lucy: Sings the chorus of "We're not gonna take it" by Twisted Sister.
Crowd dies laughing.

Here's how it actually went during the show:


Lucy tried defending her actions (and other car craziness) during our ride back to the hotel:


We had a delicious meal after the show with our kind hosts, and I ate the most delicious cupcake from Sift, which was a bakery that won the Food Network's Cupcake Wars. I have been on an unofficial quest to find the world's tastiest cupcake, and so far Sift has taken the cake (my pun zap collar gave me a little shock.)

Kerri, Lucy, and Ruby ready for our evening show: 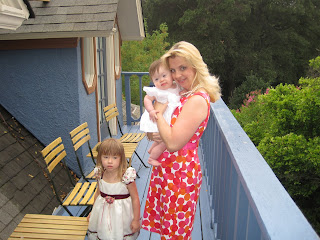 Me with my Sift cupcake box: 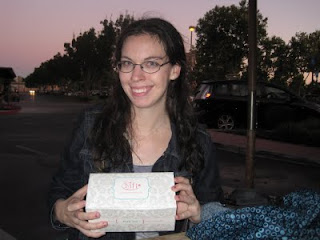 And thus concluded Day 4 of our comedy tour. And the people rejoiced. Yay. Yay. Yay.


www.funnykristin.com
Posted by Kerri at 10:43 PM